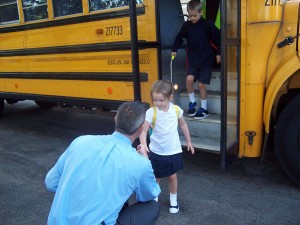 On a beautiful sunny and crispy day, DCS welcomed its students for another year full of excitement and learning.

Some students came in very early, eager to greet their teachers. Some parents came by themselves and waited until buses arrived to witness -and picture- their children’s first school bus ride. DCS director, Mr. Joseph Saia, greeted each student as they were getting off their buses.

Inside DCS there were many hugs from returning students and immediately after they were settled in their classrooms -just like they had never left! Kindergarten students found their lockers, greeted teachers and classmates and started a new chapter in their young lives.

And DCS started its second year!